Spend 3 Days In Hoi An to explore the old world charms of Hoi An with its ancient, red-tile roofed houses, yellow walls, traditional assembly halls and craft villages make for a time-machine trip to a quaint past.

BEST TIME TO VISIT – 3 Days In Hoi An

Hoi An boasts warm weather all year round with an average temperature of 29 degrees Celsius.

The heat reaches its peak between June and August when the mercury can go as high as 38 degrees Celsius during the day.

Between February and April is the most ideal time to visit Hoi An with ideal weather conditions. The rainy season from September until January, a time of typhoons and flooding, especially in October and November, is for the intrepid travelers not bothered by the elements.

Several of them have remarked that traversing the town’s flooded streets on boats during the flooding season is a must-have travel experience.

WHAT TO EXPLORE – 3 Days In Hoi An

The Japanese Pagoda Bridge is a symbol of Hoi An that has been enshrined in the nation’s VND20,000 bills.

Located adjacent to Nguyen Thi Minh Khai and Tran Phu streets, the bridge was built in the early 17th century by Japanese traders who once made up a large part of the town’s population. 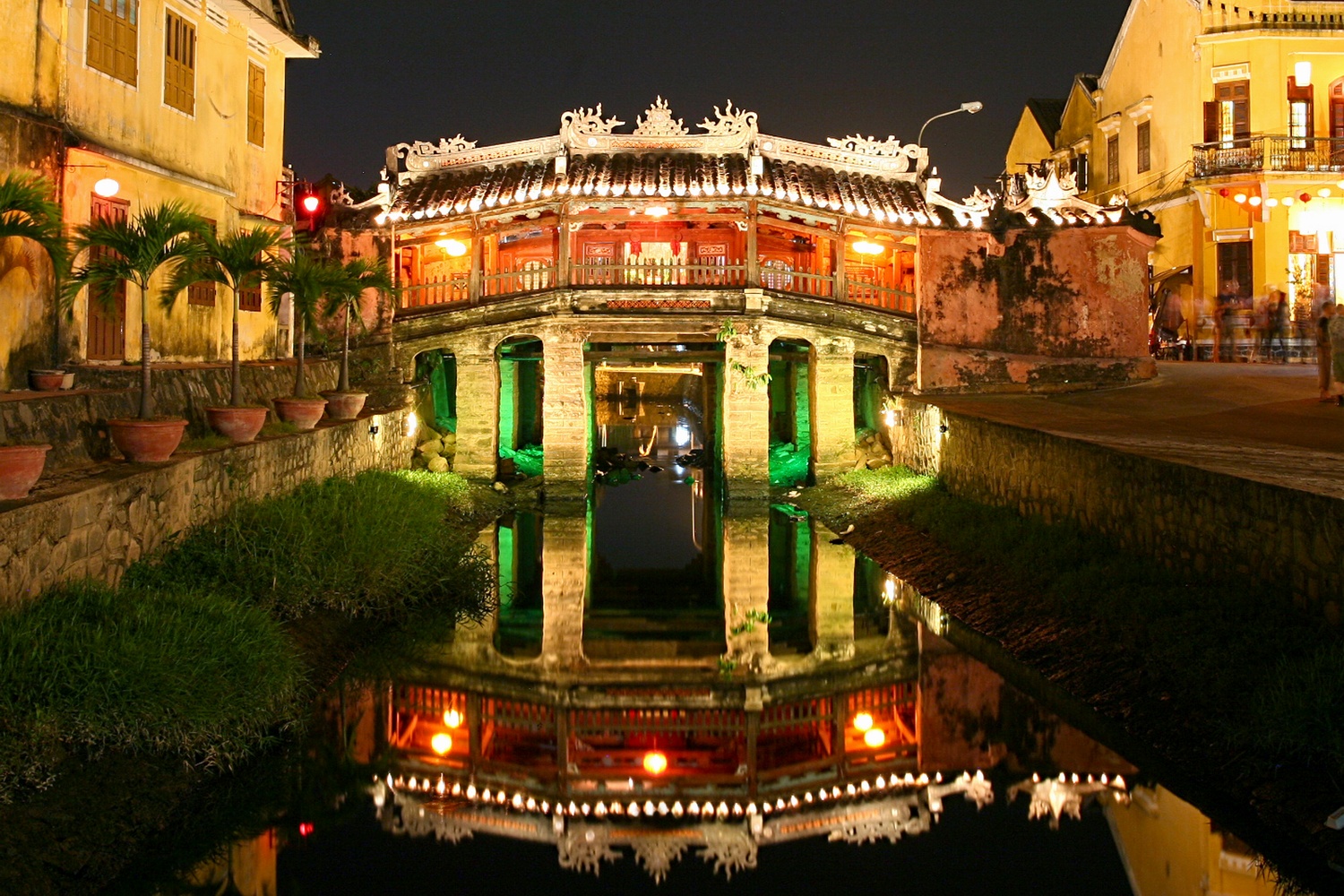 The Japanese Pagoda Bridge is lit up at night

A small shrine was built at one end of the bridge in 1653 to worship the weather gods believed to have the power to prevent natural calamities and bring happiness and wealth to people. Many have since called it the Pagoda Bridge.

Unfortunately, the bridge is not in good shape, damaged by sewage flow below. Some experts have warned that it is in danger of sinking.

Local authorities have approved a VND20 billion ($860,000) renovation plan to save the 400-year-old bridge from collapsing.

As a place frequented by Chinese traders in the 16-17th centuries, the rows of Chinese-influenced assembly halls with red tiled roofs and dragon-carved walls are a very distinctive feature that makes Hoi An stand out from other tourist towns.

Built in 1885, the Cantonese Assembly Hall is located in the heart of the town.

This assembly hall, made of wood and stone, conserves many ceramic artefacts that reflect the Cantonese community culture that once prevailed in the town. 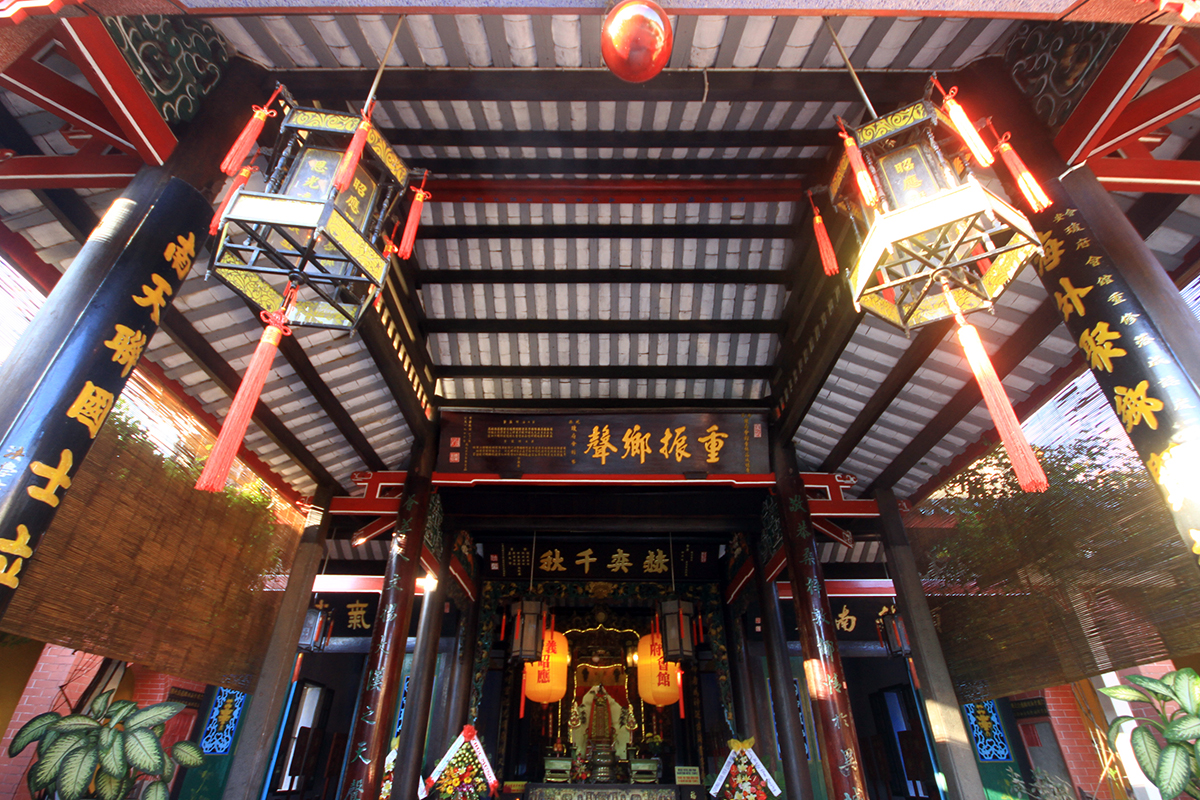 Chinese-influenced assembly hall in Hoi An

Located at 46 Tran Phu, the Fujian Assembly Hall is the largest and most well-known traditional structure. Visitors tend to light large incense rings and often hang paper sheets with prayers for health and fortune. 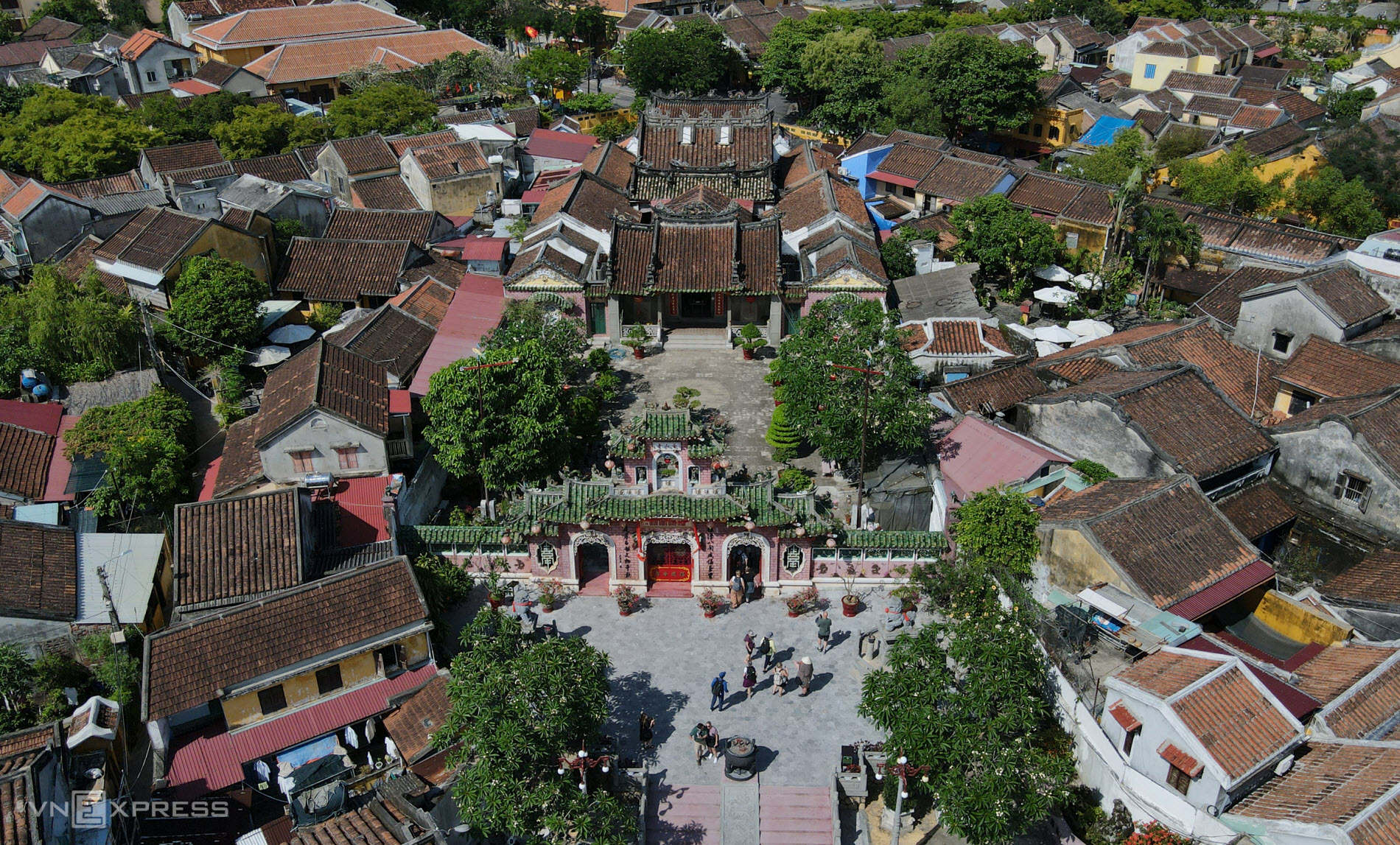 Fujian Assembly Hall is seen from above

The Trieu Chau Assembly Hall was built by the Chaozhou community in 1845 to worship the God of Sea for safe voyages and smooth sailing.

Architectural motifs featuring folk legends decorate the hall, many of them embossed with porcelain.

The Quan Cong (Guan Yu) Temple, where the deity is General Guan Yu who served under warlord Liu Bei of the late Eastern Han Dynasty, is famous for its striking Chinese architecture with tiled roofs, red lanterns and dragon carvings.

At night, the Hoai River, a tributary of the Thu Bon River, on whose banks Hoi An has flourished, is busier than ever. Many locals earn a decent living by offering river cruises on their boats for VND200,000-250,000.

During the boat ride, visitors can release colorful lanterns on the calm waters and make a wish. A lantern costs VND10,000 onwards. As soon as visitors approach the Hoai River, many hawkers offer boat rides and lantern floating services. The price can vary depending on the number of people in a group, so a bit of bargaining is in order to find the best deal.

A boat can carry up to five passengers, and each ride typically takes 15 to 20 minutes. 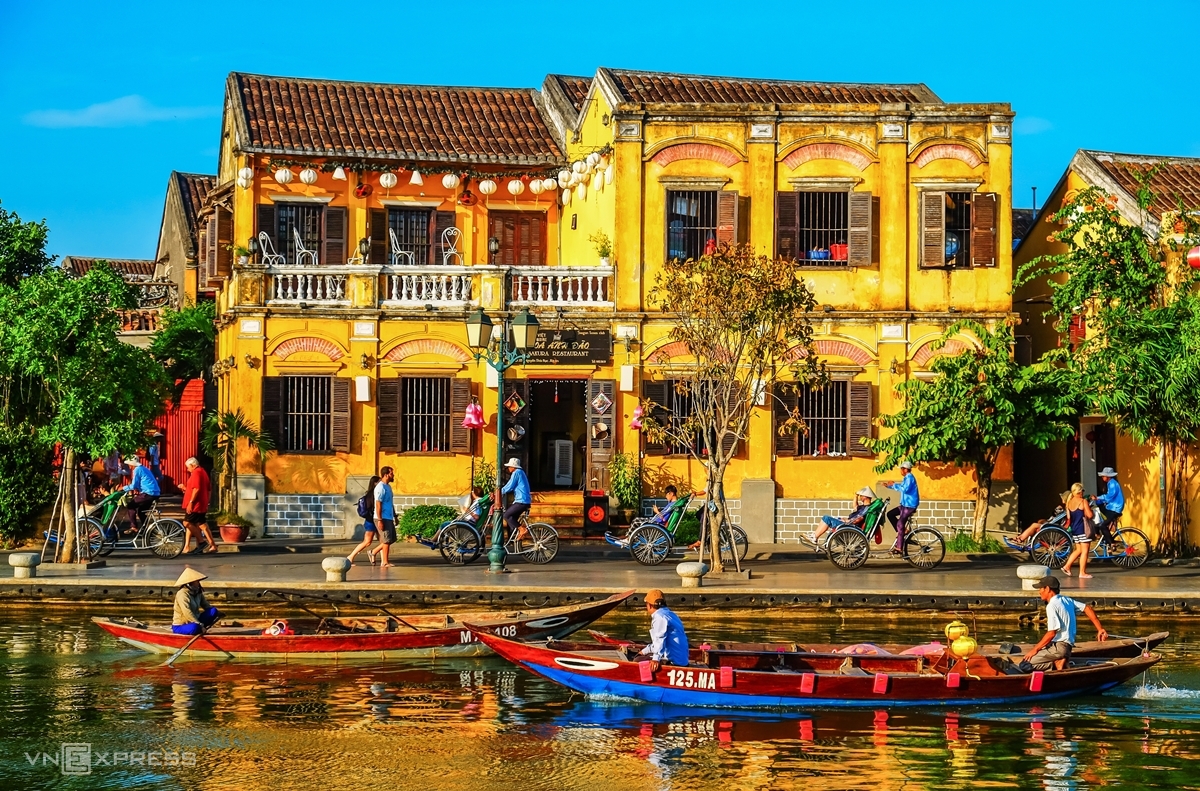 Minh Thien, a local boat driver, said his family has been carrying tourists along the Hoai River for more than 10 years, but they almost their main source of income for two years because of the pandemic.

If the boat tour doesn’t catch the visitor’s fancy, a one-hour show called “Hoi An Memories” is a really good alternative option.

With 500 actors and actresses, the show is performed on an outdoor stage covering an area of 25,000 square meters at the Hoi An Impression Theme Park on Hen Islet in Cam An Ward.

“Hoi An Memories” is staged every day of the week except Tuesday from 8 p.m. to 9 p.m.

A five-hour bike tour, which costs from $19.50 per person, enables visitors to see locals deploy their traditional craft skills like weaving straw and making boats while pedaling around Duy Vinh Island, five kilometers from downtown.

Visitors can book a tour at Heaven and Earth Bicycle Tours on Ngo Quyen Street.

From downtown Hoi An, guests can hire bicycles from their hotels and ride less than 5 kilometers to reach the Bay Mau nipa palm forest and go on coracle tours.

During the tour, visitors can also try their hand at fishing and enjoy dishes made with freshly-caught seafood.

Travelers who wish to explore the forest but stay off the water can also rent a motorbike for about $5 a day or request a complimentary bicycle from their hotels. 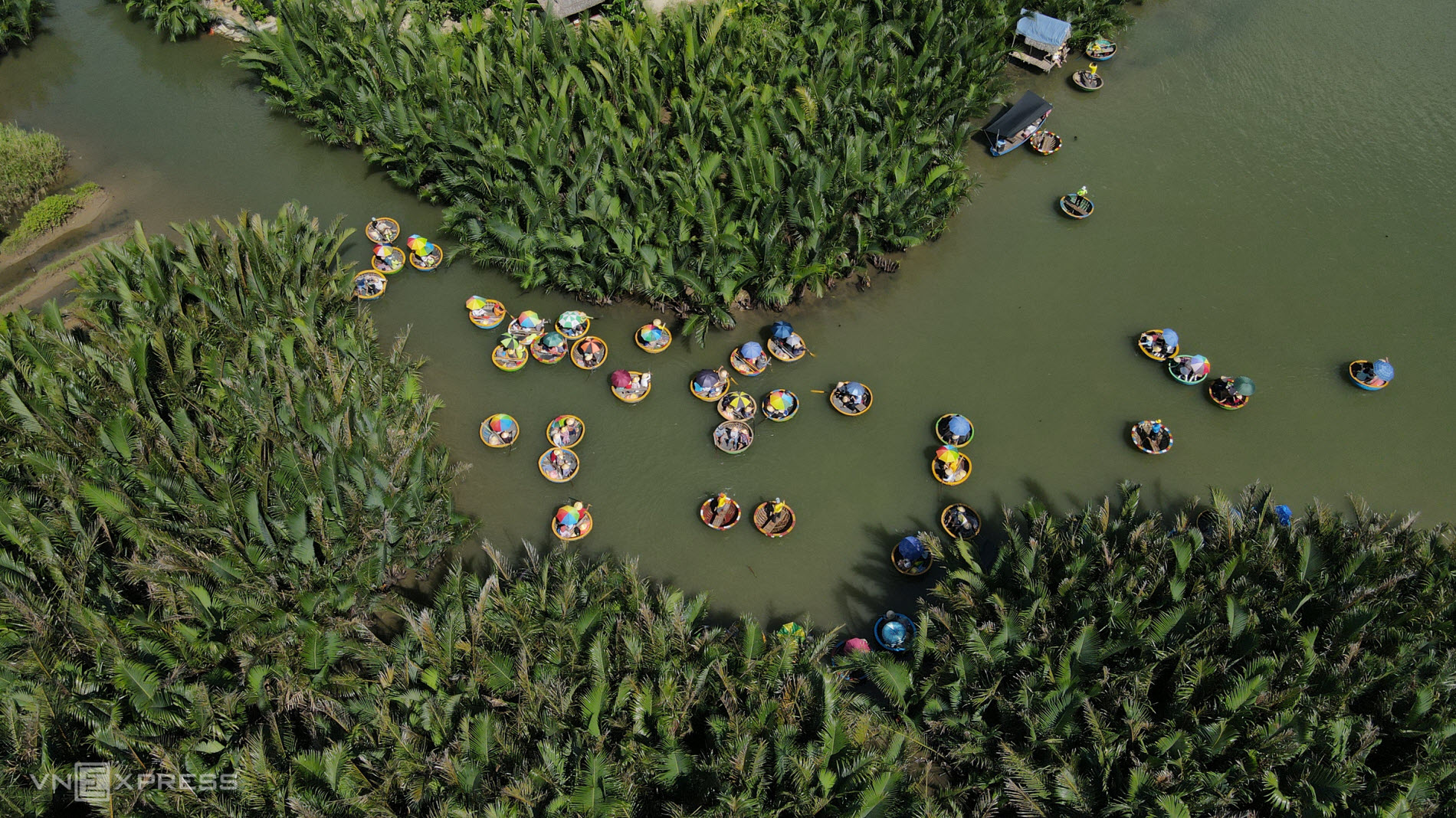 “Overall well worth doing but I would advise to get an early start before the tour groups take over,” American tourist Jason told VnExpress International.

Currently, travel agencies in Hoi An are offering one-day tours to the Bay Mau nipa palm forest and traditional craft villages which include a sampling of local cuisine for VND600,000 per person.

The Tra Que Village, two miles from downtown Hoi An, is famous for its fresh vegetables grown in fertile soil and a great place to visit.

Tra Que Village on the outskirts of Hoi An

Apart from learning about a range of vegetables and spices, visitors can directly participate in plowing the soil, planting and harvesting vegetables. Then they can enjoy Hoi An specialties cooked with fresh seafood like mussels and prawns alongside thick Quang noodles.

Not far from Tra Que stands the Thanh Ha pottery village, which dates back to the 15th century.

About two miles west of Hoi An along the Thu Bon River, the village is home to dozens of families that have been making pots, brick tiles, dishes and many unique souvenirs for generations. Visitors can not only observe the artisans’ techniques but also try their hand at making their own pottery products.

The Kim Bong carpentry village is known for the exquisite and unique woodwork it makes for houses and boats, modern decorations and souvenirs; while the Phuoc Kieu bronze casting village has been around for four centuries.

Cham Island is a popular tourist draw, offering added attractions like scuba diving and walking underwater. Situated quite close to the mainland, the island is ideal for a one-day visit. 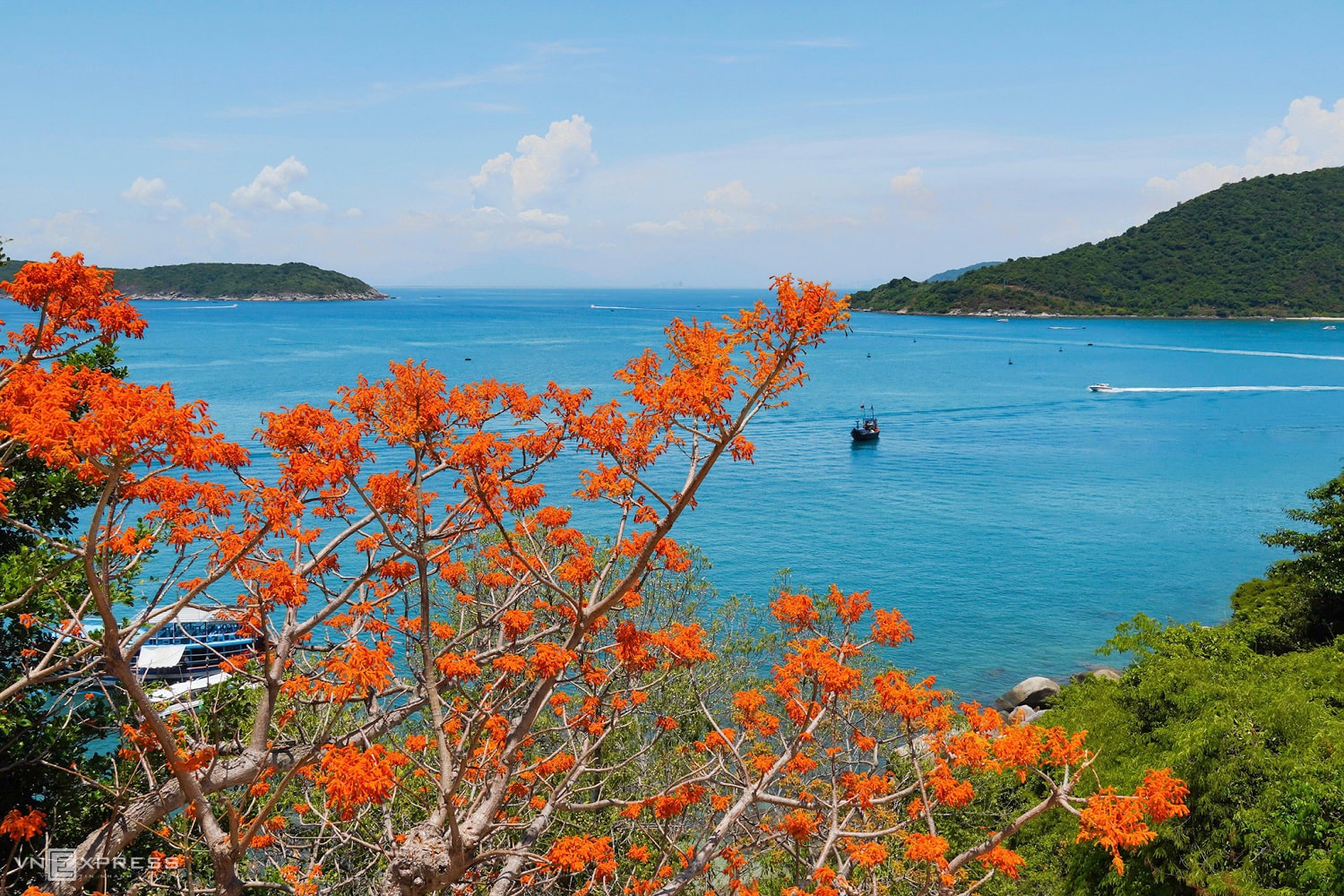 Cham Islands is only accessible by speedboats from Hoi An

Snorkeling is a popular activity here since the coral reefs are located just two meters underwater.

Interested visitors will be taken to designated dive sites and given the needed equipment. 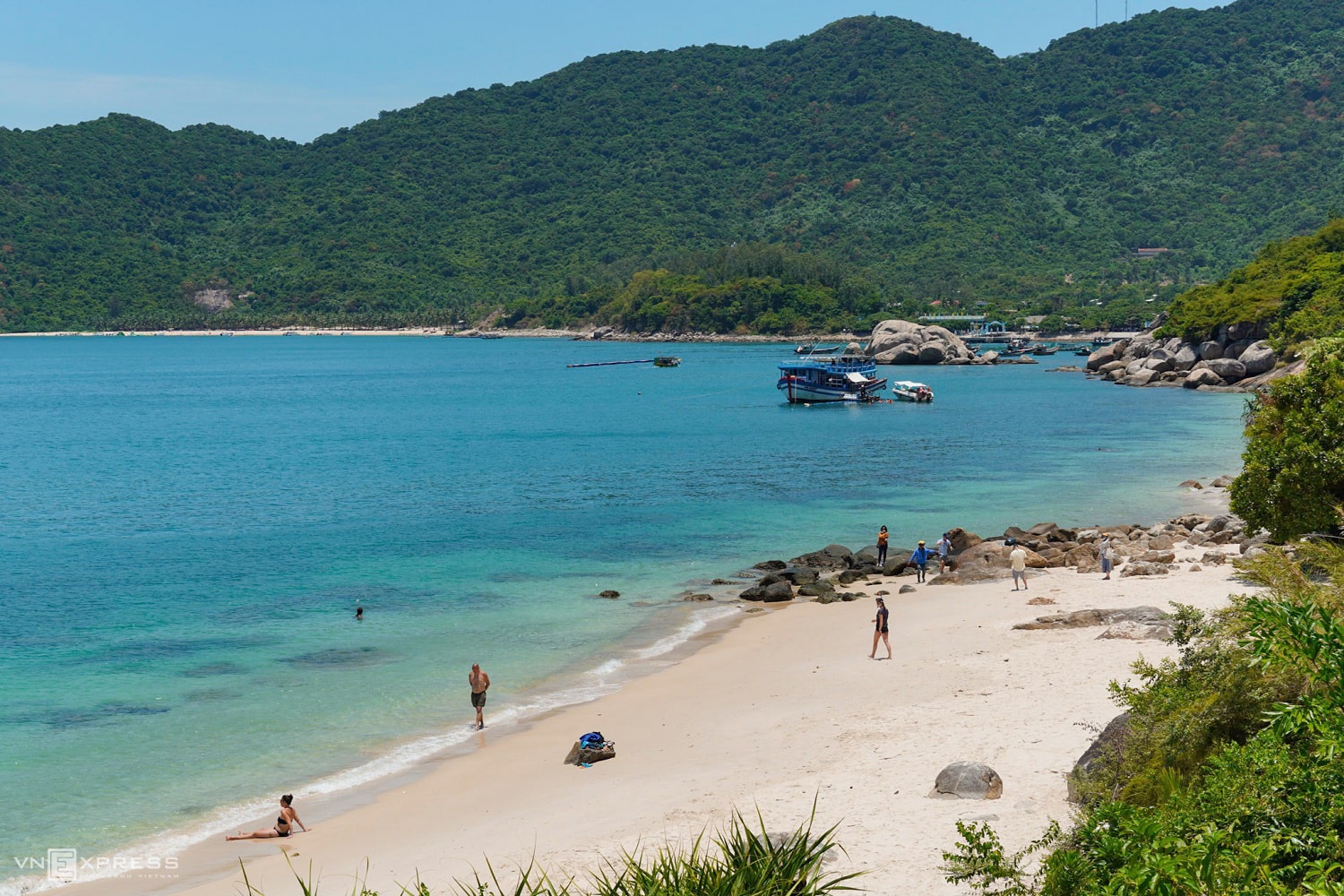 Foreign tourists on Cham Islands in Hoi An

There is a small pagoda on Cham Island that is currently looked after by an elderly couple where visitors can enjoy a lovely sense of peace and quiet.

The homestay business is flourishing in Hoi An as its global popularity grows in leaps and bounds. Hoi An homestays can be a fascinating experience, given the unique architecture and interiors. Room prices stay at above VND200,000 ($8.65) per person per night all year round.

Some popular homestays with affordable prices worth considering are Maison de Tau, Under The Coconut Tree, An Bang Beach Hideaway, Heron House and Le Bleu.

Once a convergence point of Asian traders, it’s no surprise that Hoi An boasts a rich and diverse cuisine with many influences.

The most popular dish that has become a signature in Hoi An is cao lau (Vietnamese thick noodles) that is made with poached noodles, bean sprouts and herbs from the famous Tra Que Village.

On top of the dish sits thin slices of barbequed pork and crispy fried pig skin. A bowl of cao lau can be found almost everywhere in Hoi An, but try Thanh Cao Lau on Thai Phien Street or Madam Be Cao Lau on Tran Phu Street.

A delicious bowl of cao lau will cost around $1.

Chicken rice is another must-try dish in Hoi An, travel bloggers say. A plate with either chicken strips or chopped chicken costs around VND40,000 ($1.77).

A serving of chicken rice at a stall in Hoi An

The most famous restaurants for this popular dish are Madam Buoi on Phan Chu Trinh Street and Huong’s on Le Loi Street.

Banh mi (Vietnamese sandwich), which has become a major part of Vietnam’s street food scene, assumes a unique avatar in Hoi An. The Hoi An baguette is filled with pork meat, pâté, homemade sauces, hot peppers, herbs and pickled carrots. Madam Phuong and Madam Khanh are the most famous local restaurants serving the quintessential Vietnamese sandwich in Hoi An, and are frequently mentioned in foreign media. 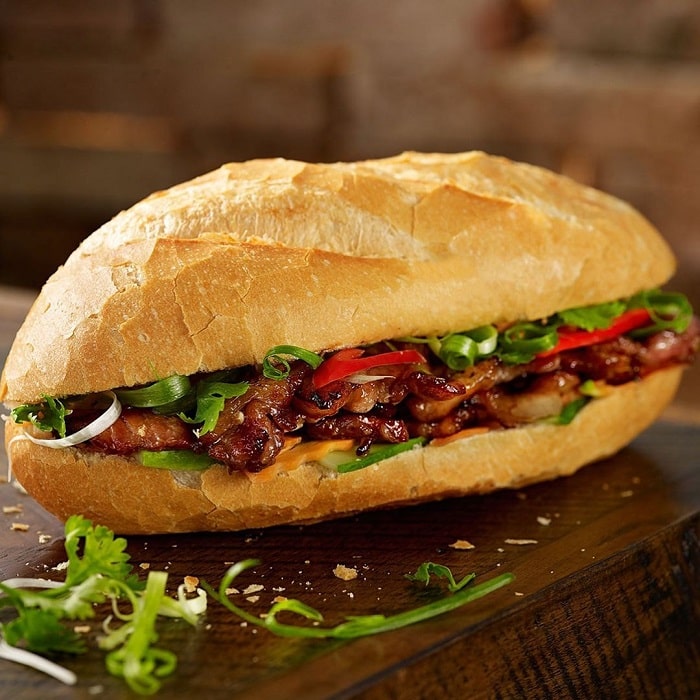 A normal baguette will cost you VND20,000 (less than $1), but splashing out an extra VND5,000 will produce a special version.

Along Tran Phu Street to the corners along Le Loi, Tran Hung Dao and Bach Dang streets, fragrant barbecue skewers are a common sight. Meat grilled in a charcoal oven and wrapped in a thin rice paper with herbs and slices of sour starfruit is another culinary treat, best had with a special sauce. A skewer costs just VND5,000 (around 22 U.S. cents).

Hoi An’s water fern cake made with rice flour, shrimp paste and fried pig skin is usually cooked and served in tiny bowls. Diners add fish sauce with chili to enjoy the dish. The most popular places to find this dish are in Cam Chau and Cam Nam wards, or inside the Hoi An market. 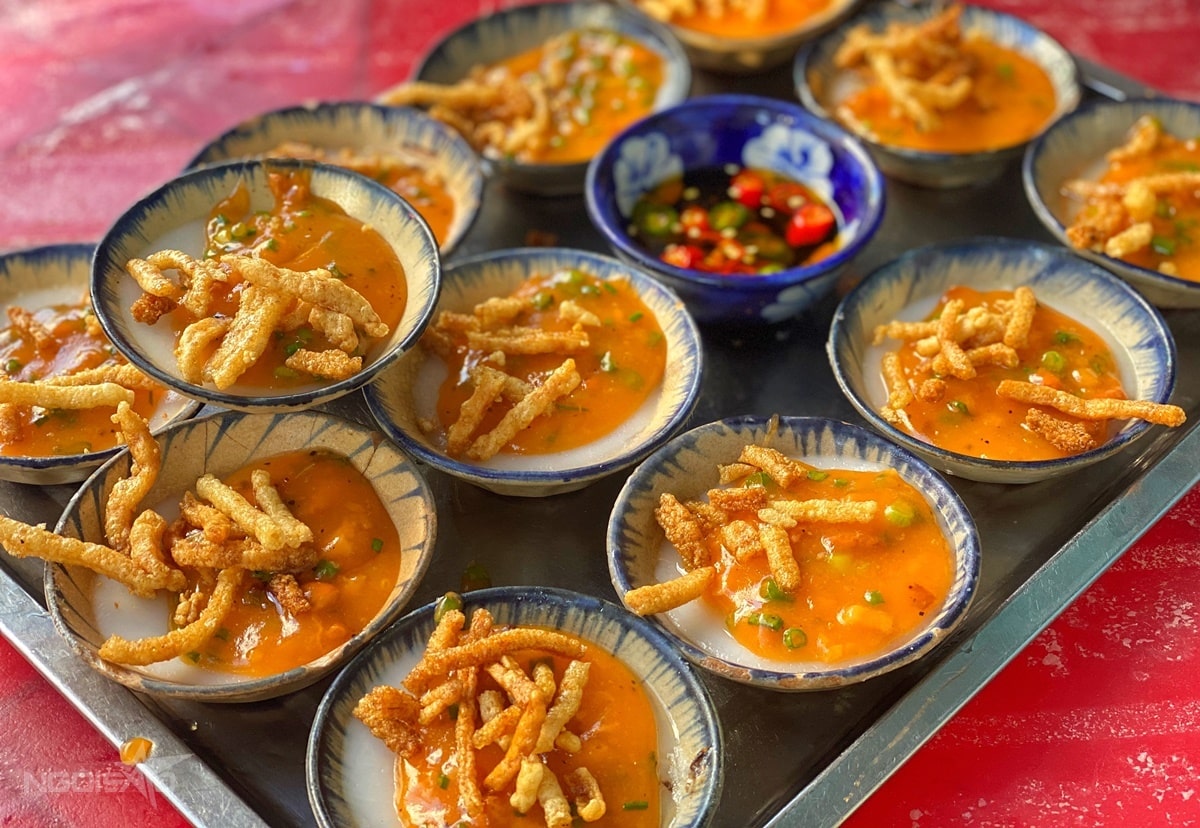 A serving of water fern cakes in Hoi An

The sight of customers surrounding street vendors selling tofu pudding is common along the Hoai River in the evenings.

A bowl of tofu pudding with a sweet and spicy ginger soup, white jelly and coconut milk costs around VND10,000.

From Hanoi and HCMC, there are direct flights to Da Nang with round-trip ticket prices starting at VND1.5 million per person.

After landing at the Da Nang airport, visitors can take a shuttle or catch a bus or Grabcar to Hoi An, which is around an hour’s drive from downtown Da Nang.

There are daily buses running from Da Nang to Hoi An with tickets costing VND20,000 per person.

It is easy to rent bicycles or motorbikes to move around in Hoi An, with most hotels and homestays offering the service. Renting a bicycle or a motorbike costs around VND30,000 and VND120,000 a day, respectively. 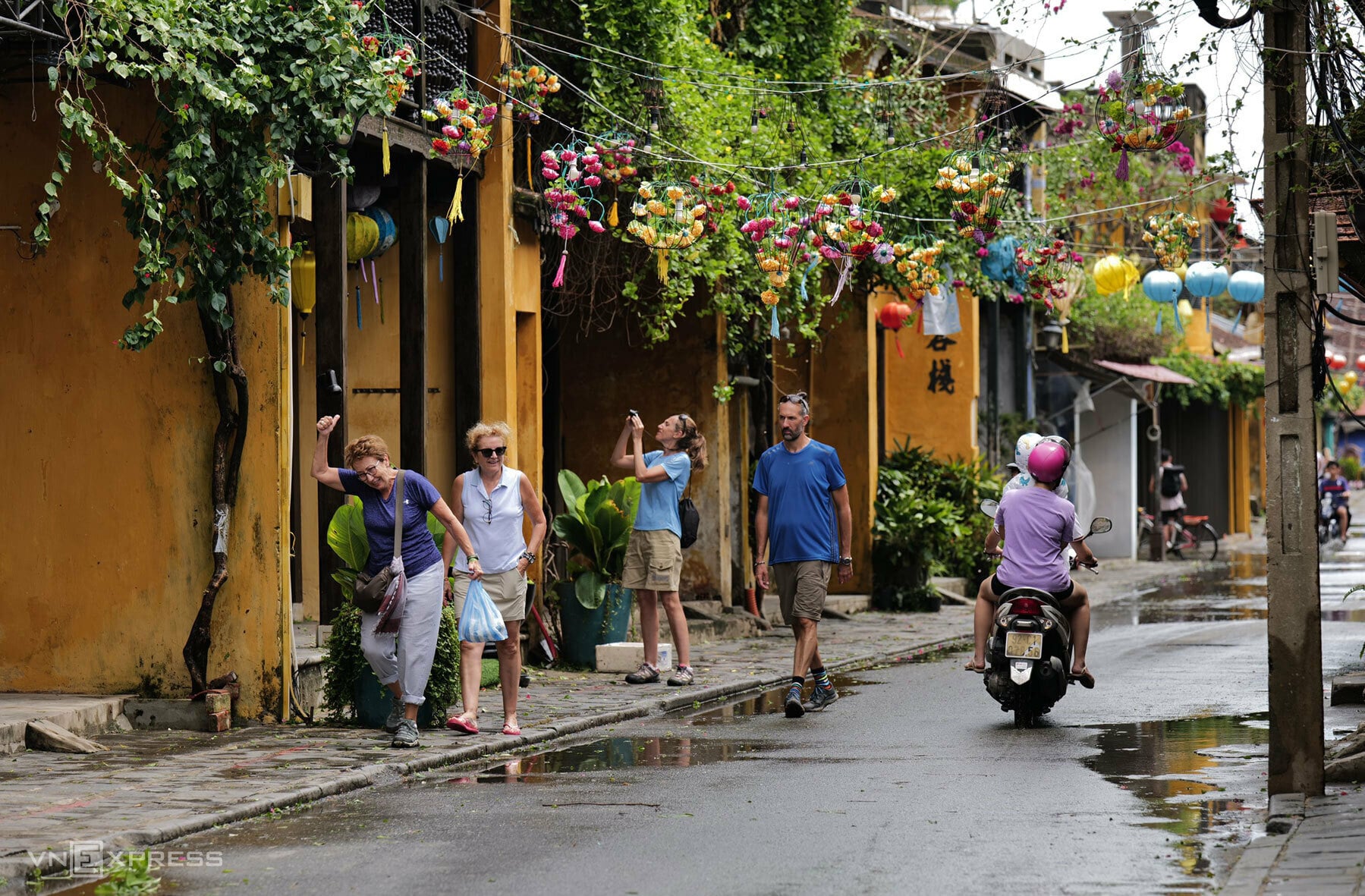 Foreign tourists walk on a street in Hoi An Town

How to get to Ba Be Lake View Homestay