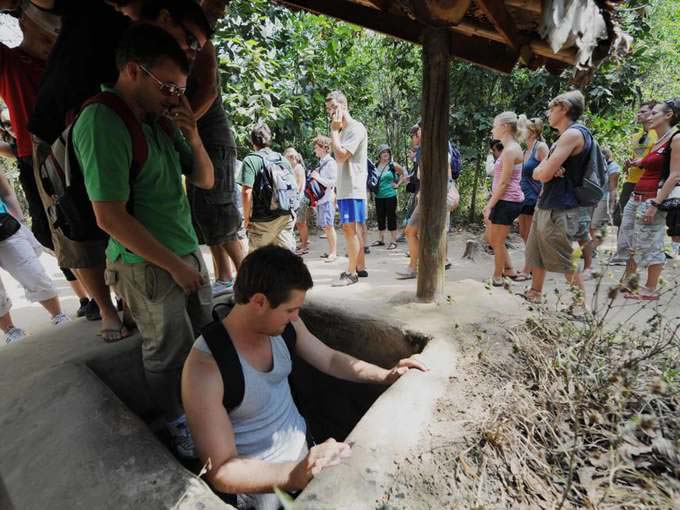 Foreign tourists climb into the underground network during a tour to Saigon’s Cu Chi Tunnels. Photo by AFP

The famous tunnel network that survived intense Vietnam War bombings by the U.S. is among world’s best underground tours.

Lying around 70 kilometers (43 miles) northwest of downtown HCMC, the Cu Chi Tunnels are an enduring symbol of Vietnamese resistance and bravery during the Vietnam War.

The complex of tunnels is now a global landmark that receives millions of visitors ever year.

The 250-kilometer-long complex was built in the late 1940s and underwent intense bombardment by the Americans in the 1960s.

Today, the tunnels are preserved as a war memorial, attracting tourists from all over the world, curious to see what underground life was at that time.

While the more intrepid visitor is invited to try squeezing through a very small section of the tunnels in their original form, most visitors will have to opt for a widened portion.

“The tunnels have been enlarged to accommodate generously proportioned foreign tourists, who must crawl through the enclosed space on hands and knees. Definitely not for claustro­phobia sufferers or anyone in white clothing,”an SCMP report says.

Last year, the Cu Chi Tunnels came in 8th among the top 25 Asian landmarks voted for by TripAdvisor travelers.

The American news site CNN had earlier listed it as one of the world’s top underground tourist attractions.

Other underground sites mentioned by the SCMP site include the Thames Tunnel in London, The Somme in France, the Channel Tunnel between England and France and the Great Siege Tunnels of Gibraltar.