The magnificent cave systems in Quang Binh have justly hogged the limelight, but there are many other attractions to bask in.

The discovery of the Phong Nha Cave, and then the Son Doong Cave, firmly stamped the central province of Quang Binh on the world tourism map as a must-visit destination in Vietnam. The province soon came to be known as the Kingdom of Caves that has attracted many speleologists, explorers and travelers to visit it.

So far in 2018, the total number of visitors to Quang Binh reached 3.9 million, an increase of 18 percent over the same period last year, according to the Vietnam National Administration of Tourism (VNAT).

Beautiful tourism farmlands and western streets have formed in the areas near the caves, but when we took three days off to explore the province, Quang Binh turned out to have far more attractions than suggested by catchy promotion headlines or high-definition photographs. 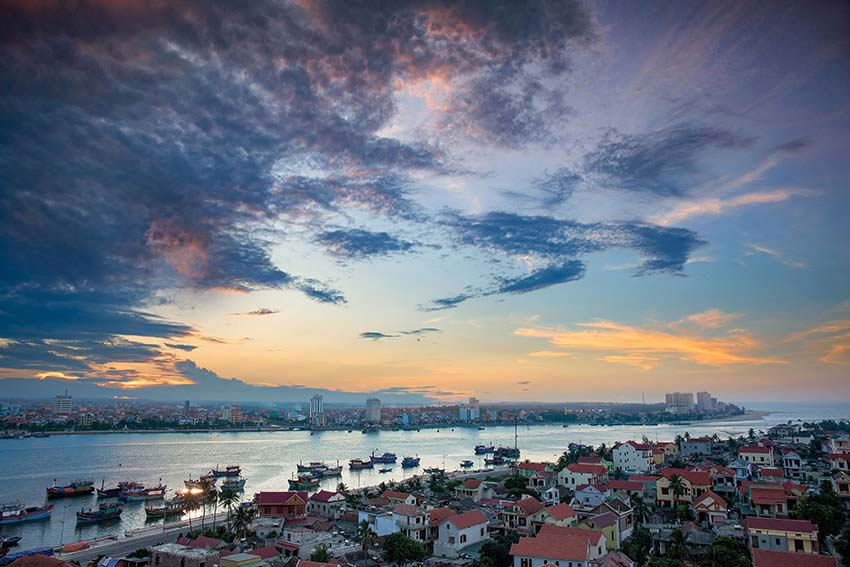 We took an overnight train departing from Hanoi to Dong Hoi city, the center of Quang Binh. A 30 something dollar fare for a round trip was far more reasonable than the airfare, so spending more time on the train journey was no problem.

The tiny train station welcomed us with unexpected professional services: free wifi, digital billboards and easily available taxi services. We started our adventure by reaching our homestay on Nguyen Du street, a road overlooking the Nhat Le river. Many good hostels offer accommodation at a very reasonable price here. Our triple-bed room cost us about $16 per day.

We chose the dry season, from April to August, to visit Quang Binh, when it is hot and sunny. In the September to March rainy season, we might miss our chance to see the vast white sand dunes, or be unable to enter the famous Phong Nha because of high water levels. 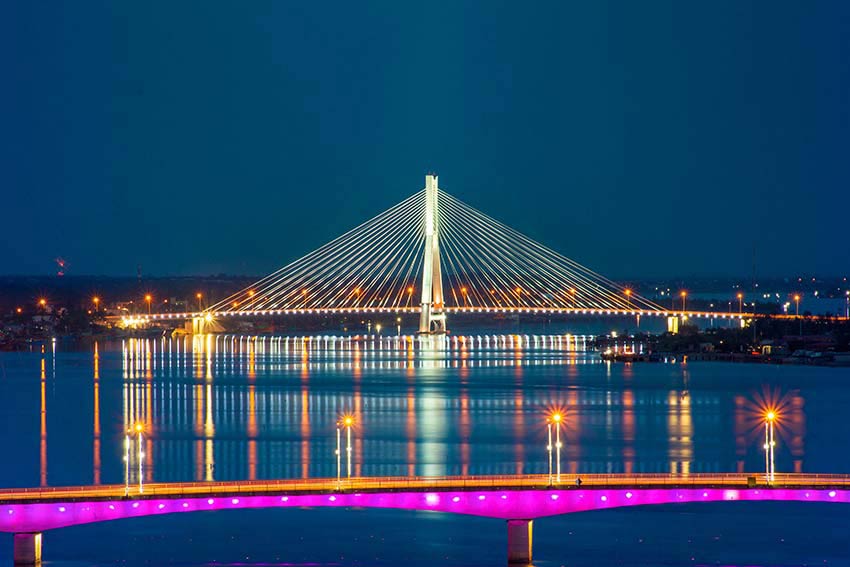 Our first destination was the Nhat Le Beach, right in Dong Hoi city. We missed the sunrise, but the morning breeze on the beach provided welcome relief from the stuffy weather in the city.

Nhat Le beach was not very crowded, probably because it was not peak season yet. The dialect spoken indicated most of the people there were locals. There are no fancy cottages to rest in, cocktails to drink or exciting water sports to enjoy. All this made the beach even more attractive – just the waves and sand for everyone to enjoy. A rare treat, these days. 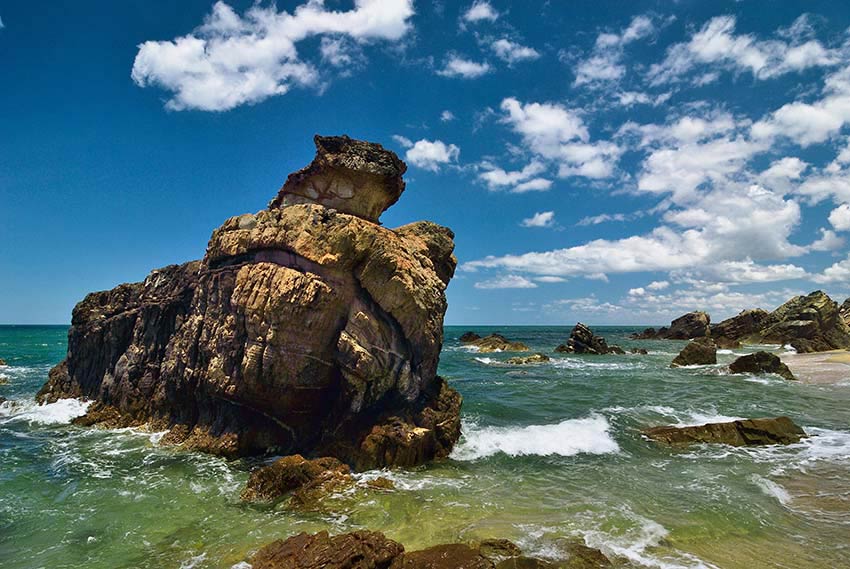 We had another beach on the day’s schedule. Thirty minutes in a taxi and we were at the Da Nhay Beach. The taxi driver had agreed on VND300,000 ($12.8) for a round trip. Very reasonable, considering he had to wait and drive us back. 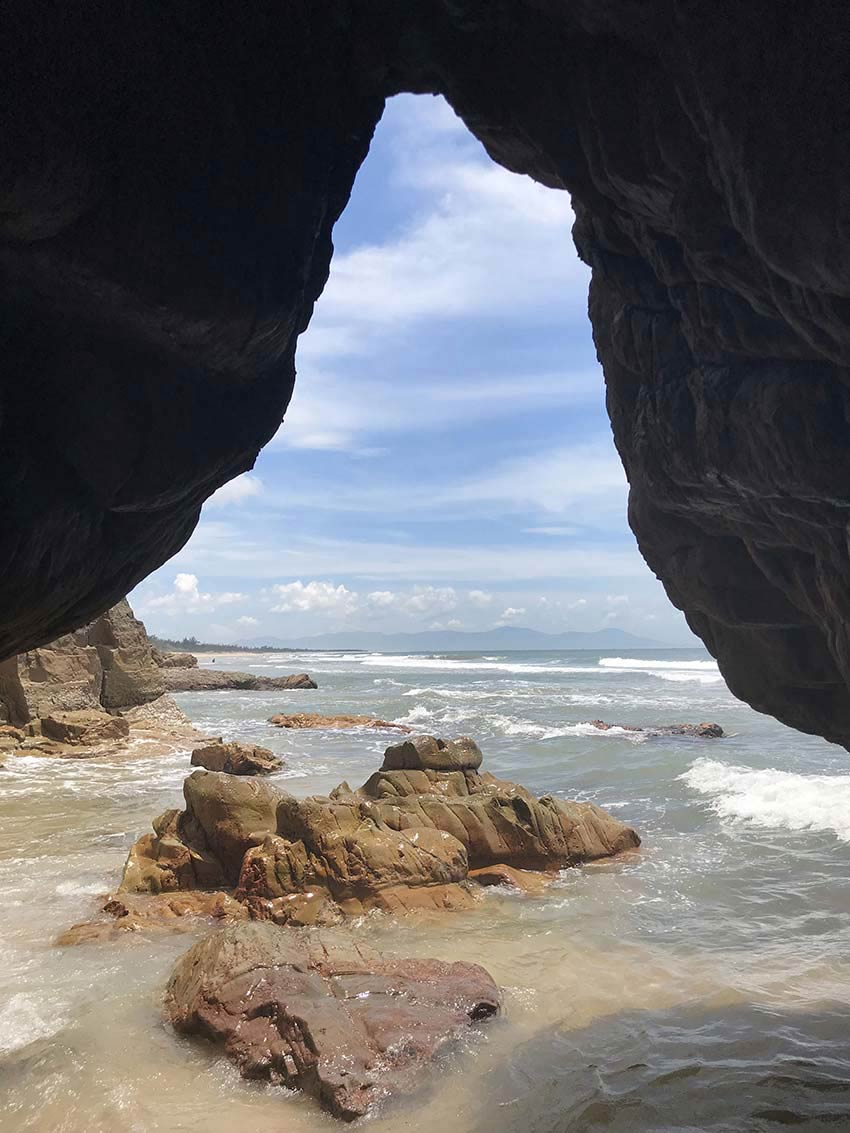 The Da Nhay beach (Dancing Rock) is strikingly beautiful, with its scattering of black rocks on white sands. We decided to skip swimming, climbed on to the rocks and listened to the waves crashing against the rock. We were looking to commune with nature, and this was happening in a great way.

Since eating out is a big part of a holiday, we were paying extra attention to our stomachs for the first signs of rumbling. A random choice from a row of restaurants on the street was our plan, when our taxi driver pitched in. “You must try the fish porridge here. It’s famous for it.”

What a meal that was! The waitress brought us a big pot of flawless white congee with fish slices and green onions. For about $10 dollars worth, the pot could satiate five people. When we returned to the taxi, we were fully recharged, and thankful for our driver’s advice.

Sand dunes and the sea

After two different kinds of beaches, we were headed to a third sea scenario, this time, one that involved the Quang Phu sand dunes.

Just 4 kilometers away from the city center, this sand dune stands on one side of the promenade that runs along the Nhat Le beach. Goes without saying that the route was very scenic. To our right was the emerald sea and on the left were the white sand dunes.

We stopped at a green tube house on the road that had a sign that said “sand slides”. Locals offer parking services and plastic panels that work like sleds on the dunes. We parked our bikes on the sidewalk, rented three thin plastic panels and climb up the sand dune without much expectation. 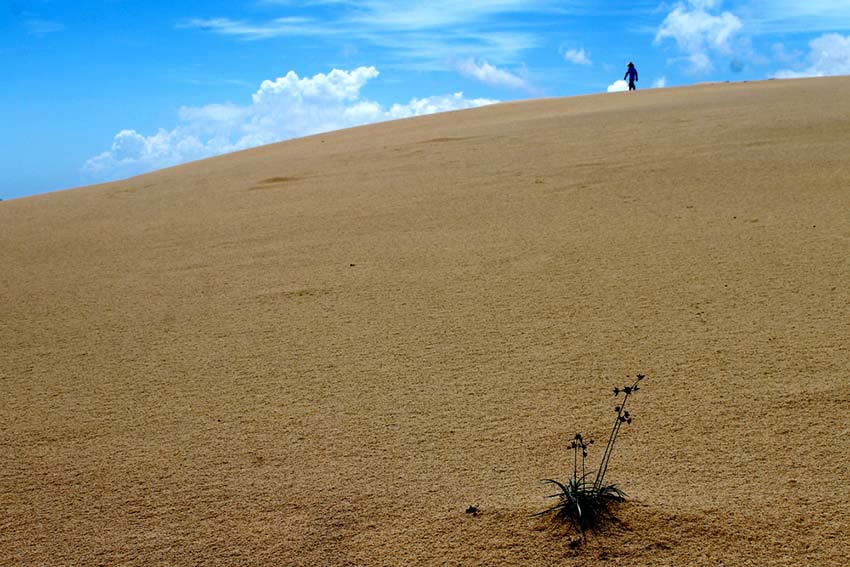 The dune did not seem very high, but once we got to the top, the view stunned us for a moment. “It feels like we are walking in the desert, like the Little Prince”, Anh, my companion, cried out.

It was very cool. The wind blew against our face and hair as we slid down the dune, which was really fun. But visitors need to be careful not to carry belongings that can fall off and get buried in the sand right away.

All that “exercise” got us ready for our next meal and Dong Hoi City treats the visitor well, offering many central Vietnam specialties. As a coastal city, it has an impressive variety of seafood on offer, too. On the banks of the Nhat Le river are a succession of open-air seafood restaurants that presents this seafood variety in a variety of dishes. There are several mini food courts around the Dong Hoi and Ga market.

We had dinner at the Tu Quy restaurant on Co Tam street, gleefully filling our stomachs with Quang Binh specialties including the Vietnamese pancake banh xeo, rice cakes, noodles with grilled meat and rice rolls.

The caves, of course 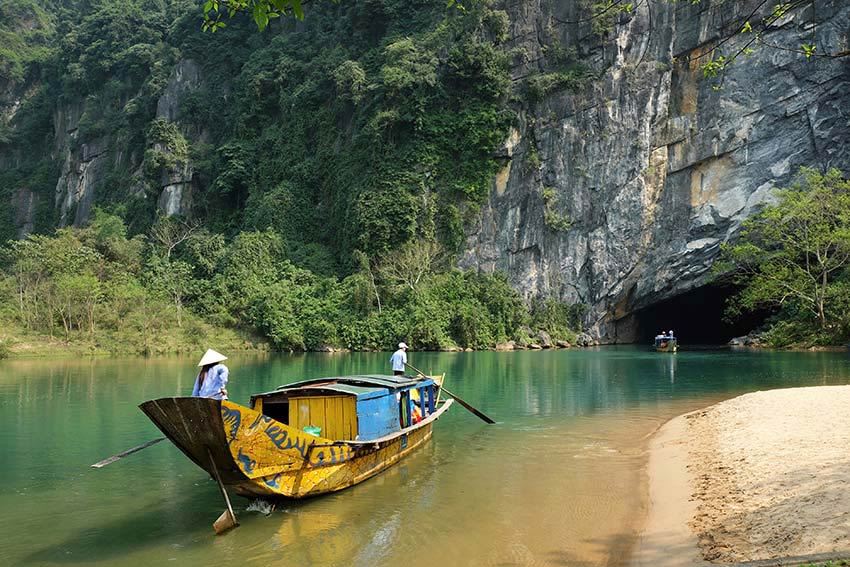 The entrance of Phong Nha cave. Photo by Shutterstock

You cannot visit Quang Binh and miss out on the province’s greatest pride: the caves. We chose to take a bus to the Phong Nha Cave by bus, a cheap 50km ride that is not advisable for people who do not know Vietnam well. A round trip taxi ride would cost you around VND400,000 ($17.17).

A boat ride is needed to reach the cave proper. A boat can accommodate 12 people, so it is better to share it to lower costs. The journey begins in the dark, a great experience on its own. The cave itself is a marvel, of course, the stalagmites formed over millions of years never failing to inspire awe.

The Paradise Cave, around 70 kilometers from Dong Hoi city, is another must-visit site in Quang Binh province. We booked a day tour to visit Paradise cave and the Dark Cave – Chay river complex. The tour costs VND1.3 million ($55.83), all meals and ticket fees included. If you want to rent a round-trip taxi service to the cave, thrown in another VND600,000-700,000 ($25.76-30.06). Visitors may walk or rent an electric shuttle to reach Paradise cave’s mouth after getting off the boat.

“The men have gone abroad to work”, the boatwoman told us, explaining why most drivers and tour guides here were female. Quang Binh tries to send 2,400 – 2,700 people ever year to work abroad.

As we took the first step on the wooden walkway inside the cave, the drop in temperature was immediate. The walkway for the general public is one kilometer long, but explorers can take a tour with experts to explore the next seven kilometers.

It was in the Dark Cave – Chay River tourism area that the excitement and exhilaration began. 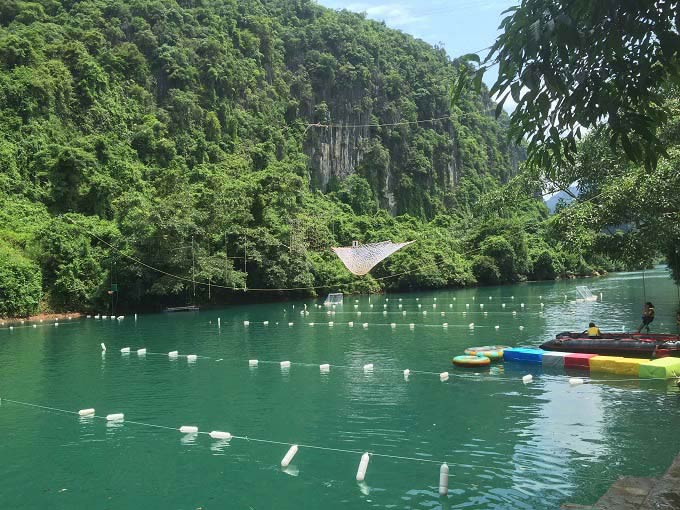 The zipline was the thrill for us on this trip. The feeling of flying in the air across the river to get to the Dark Cave is not something you get to do on a normal holiday.

Inside the dark cave, full of sharp rocks and slipper steps, there was both the fear and thrill that danger can provide when there is safety at hand, in this instance, we had a guide who knew the place and her job very well. Without her, there would be zero thrill and 100 percent fear – fear that one small mistake can cost us our lives.

We swayed and wriggled till we reached the mineral mud bath. “Come inside, the mud is great for your skin”, said Tuyen, our tour guide. An underground stream carries minerals from limestone blocks in a nearby valley, piling the mineral mud near the mouth of the Dark cave. A mud bath would make your skin glow, our guide insisted.

On the way back, one tourist’s light went off. Tuyen handed him her light and guided us through the dark.

“Don’t worry, this is like my house. I know everything about it”, she said as she agilely climbed over a limestone rock, knowing exactly where to put her feet.