Son Doong Cave in the central province of Quang Binh was opened to tourists in 2013 and has become a top adventure destination in Vietnam. Photo by VnExpress/Jarryd Salem

The Lonely Planet says Son Doong Cave in Quang Binh is among the best places to visit in 2019.

The renowned U.K.-based travel guide publisher recommends highly an expedition into the world’s largest cave, but warns that the trip has to be booked early due to very limited slots.

“The incredible depth of the world’s largest cave lures in travelers who want a true adventure. But the arduous journey into this subterranean site makes booking a trek essential,” it notes.

Oxalis, now the only company licensed to bring tourists to Son Doong, says on its website that early registration is a must, with only 300 spaces left for 2019 tours.

A four-day expedition costs $3,000, and there are bus routes running from Hanoi to Dong Hoi, the capital town of Quang Binh, and then to the national park where the cave is located, Oxalis informs.

Besides the amazing cave in Vietnam, the Lonely Planet also recommends a journey to the Inca Trail in Peru, a cultural festival called Burning Man in Nevada and a trip to Under Restaurant in Norway.

Son Doong, part of the Phong Nha-Ke Bang National Park in central Vietnam, has hogged the international spotlight since it opened to tourists in 2013. 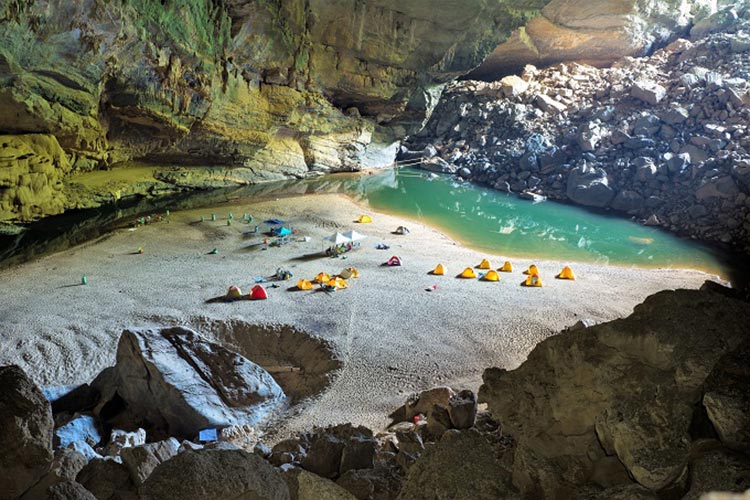 Hang En, the entrance to Son Doong Cave, the largest cave in the world, is in the heart of the Phong Nha Ke Bang National Park in Quang Binh. Photo by Oxalis/Ryan Deboodt

The cave opened to tourists in 2013, four years after members of the British Cave Research Association finished their exploration and declared it the world’s largest.

Local resident Ho Khanh first discovered the cave in 1991, and rediscovered it almost 20 years later, opening it up for exploration.

The government of Quang Binh Province, known as the kingdom of caves, recently raised the limit for number of tourists allowed to visit the cave from 640 to 900.

The province has over the past years proposed several developments, including a cable car system to boost tourism in the area, but these have met with strong opposition from environmentalists and the public.

Hanoi in TripAdvisor’s best destinations for 2019