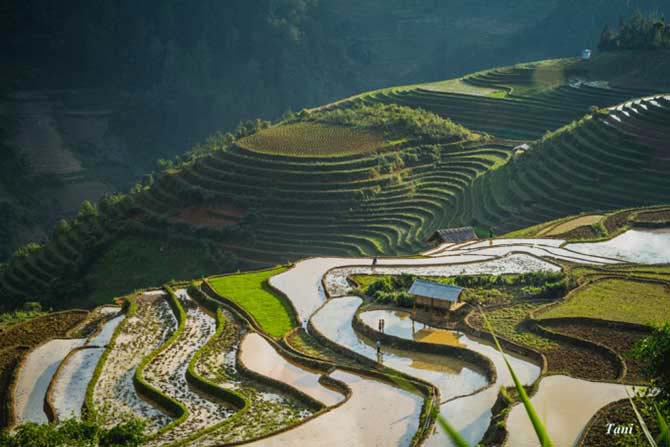 ‘Terraced rice fields are a shade of green so deep, you’ll feel like you’ve stepped into a painting.’

Mu Cang Chai, a rural town lined up with mesmerizing rice terraces in Vietnam’s northern highlands, has been named one of the 19 most picturesque peaks on earth.

U.S. travel site Insider called it “a hidden gem” where the “terraced rice fields are a shade of green so deep you’ll feel like you’ve stepped into a painting.”

Depending on the time of year, the color can vary from emerald green to golden yellow and light brown.

Mu Cang Chai in Yen Bai Province is around seven hours drive to the northwest of Hanoi. It sits at 1,000 meters (3,300 feet) above sea level at the foot of the Hoang Lien Son mountain range.

People from the H’Mong ethnic group started carving rice terraces into the mountain range centuries ago and are still harvesting them today.

This video shows the magnificent view of Mu Cang Chai and Yen Bai from a glider.

The Insider list shows the world is full of mountainous wonders.

It includes Rainbow Mountain in Peru; Iceland’s Kirkjufell Mountain, which was used to shoot “Game of Thrones”; the Three Sisters sandstone rock formation in Australia; the Dolomites range surrounding a jewel-toned lake in Italy; the world’s longest continental mountain range the Andes in Bolivia; Europe’s largest mountain system the Alps; the active volcano Mount Rainier in Washington; the colorful and striped mountain range of Danxia in China; Mount Fuji in Japan and the Canadian Rockies.