Tired of getting trapped in noisy, crowded resort towns during summer? Then set yourself adrift at these top Vietnamese kayaking hubs.

Kayaking is a watersport that involves paddling using a double-bladed oar and a small boat known as a kayak. The boats come in a variety of sizes and types, depending on their intended use, but most kayaks feature an enclosed deck that covers the legs. Kayaks sit low in the water and usually only accommodate a single paddler, but tandem kayaks hold two people while others hold three.

Popular in the U.S. and Europe, kayaking has made steady ground in Vietnam, which offers some paddling hotspots allowing travelers to explore magnificent natural landscapes.

Located on Nho Que River in the northern province of Ha Giang which borders China, Tu San is the deepest canyon in Southeast Asia stretching 1.7 kilometers with cliffs as high as 700 – 800 meters. 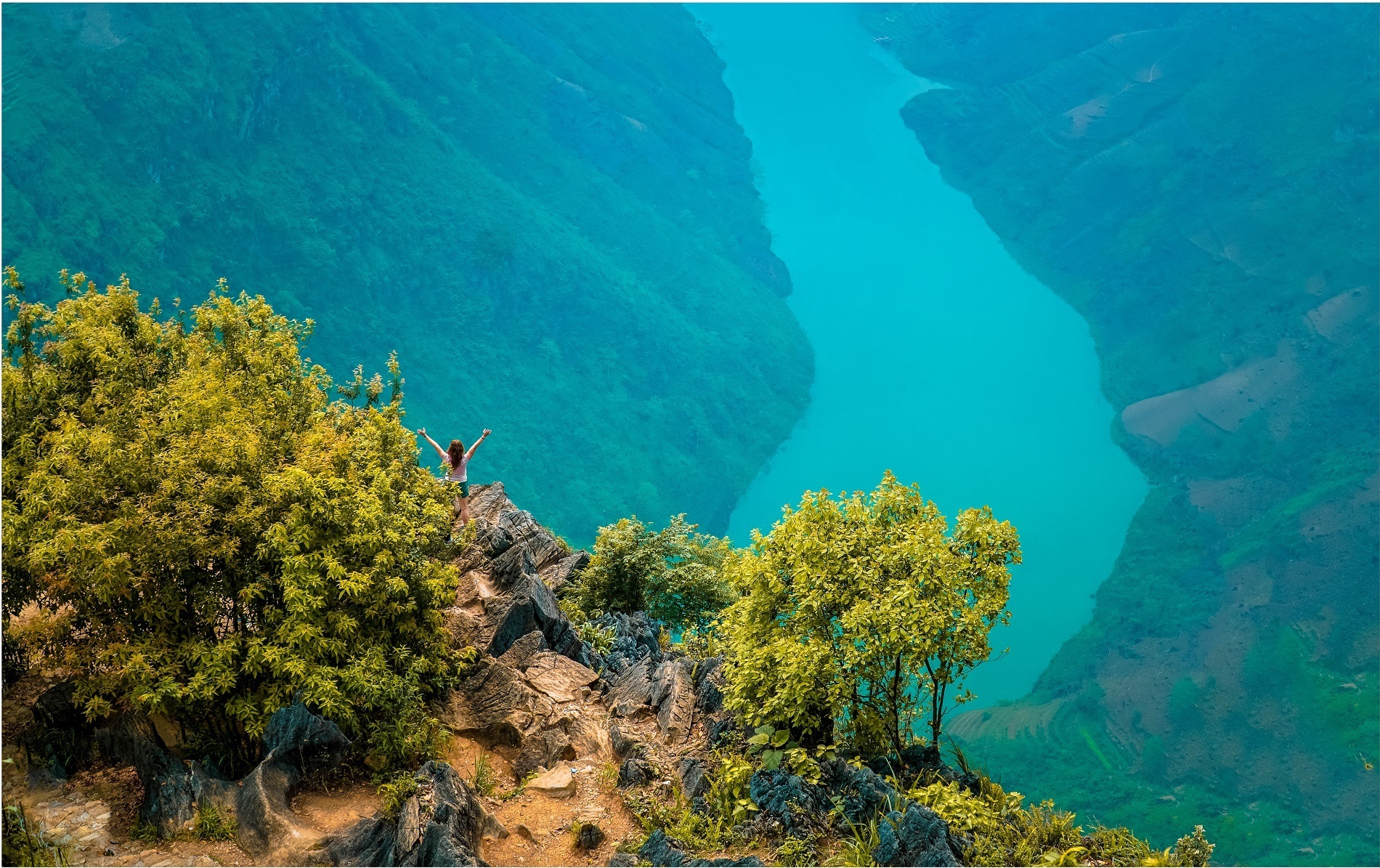 Local residents rent out kayaks for VND50,000 ($2.2) per person and motorboats for VND100,000 ($4.3). Visitors should call in advance to book. The winding road leading to Nho Que River, unlit at night, takes about 40 minutes to one hour on foot.

In February and March, both sides of the river are dotted with red kapok trees, contrasting with the emerald-green water.

A total 17 ethnic minorities call the plateau home, cultivating rice along the Nho Que River basin and corn on the rocky mountain slopes.

Situated around 300 kilometers (186 miles) from Hanoi, Ha Giang has become an increasingly attractive destination for its narrow, twisting mountain passes that kindle the adventurous spirit.

Ba Be Lake lies at the heart of Ba Be National Park in Ba Be District, Bac Kan Province, northeastern Vietnam.

Ba Be Lake in Bac Kan Province is a hidden gem. Photo by Shutterstock/Andy Tran

Kayaking allows visitors to get up close to different species of wildlife, pass through lush forests, skirt karst mountains and slip inside small caves, all in eco-friendly manner.

At Nam Dai Village, a kayak laden boat will take you along Nang River to the massive Puong Cave filled with stalagmites and stalactites, alongside thousands of bats.

Around 240 kilometers north of Hanoi, a drive of about five hours, Ba Be is easily reached via direct bus or private transport.

Please keep in mind that the road can be dangerous, especially on rainy days, so make sure to drive carefully. Motorbike enthusiasts are advised to be experienced and comfortable covering long distances. 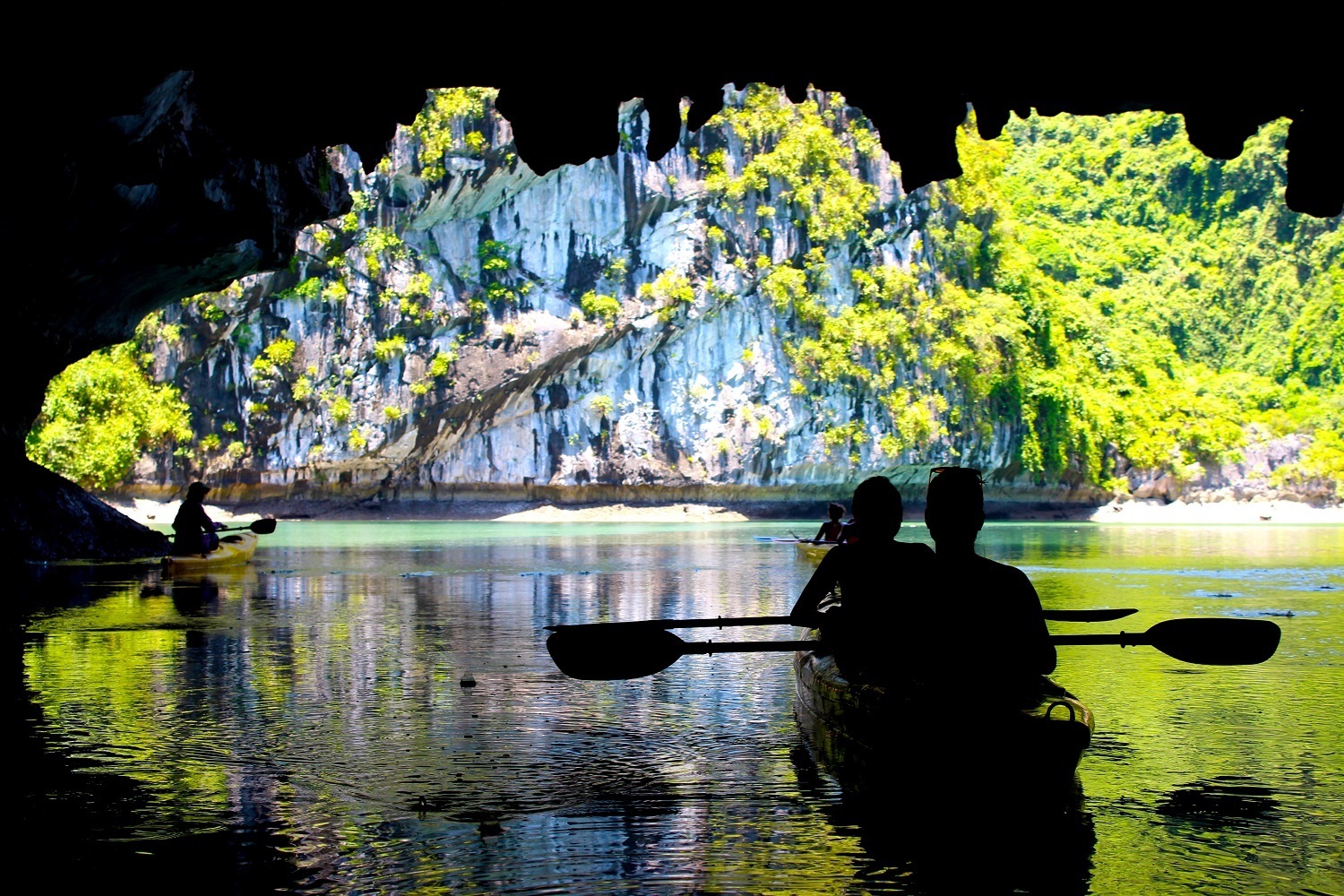 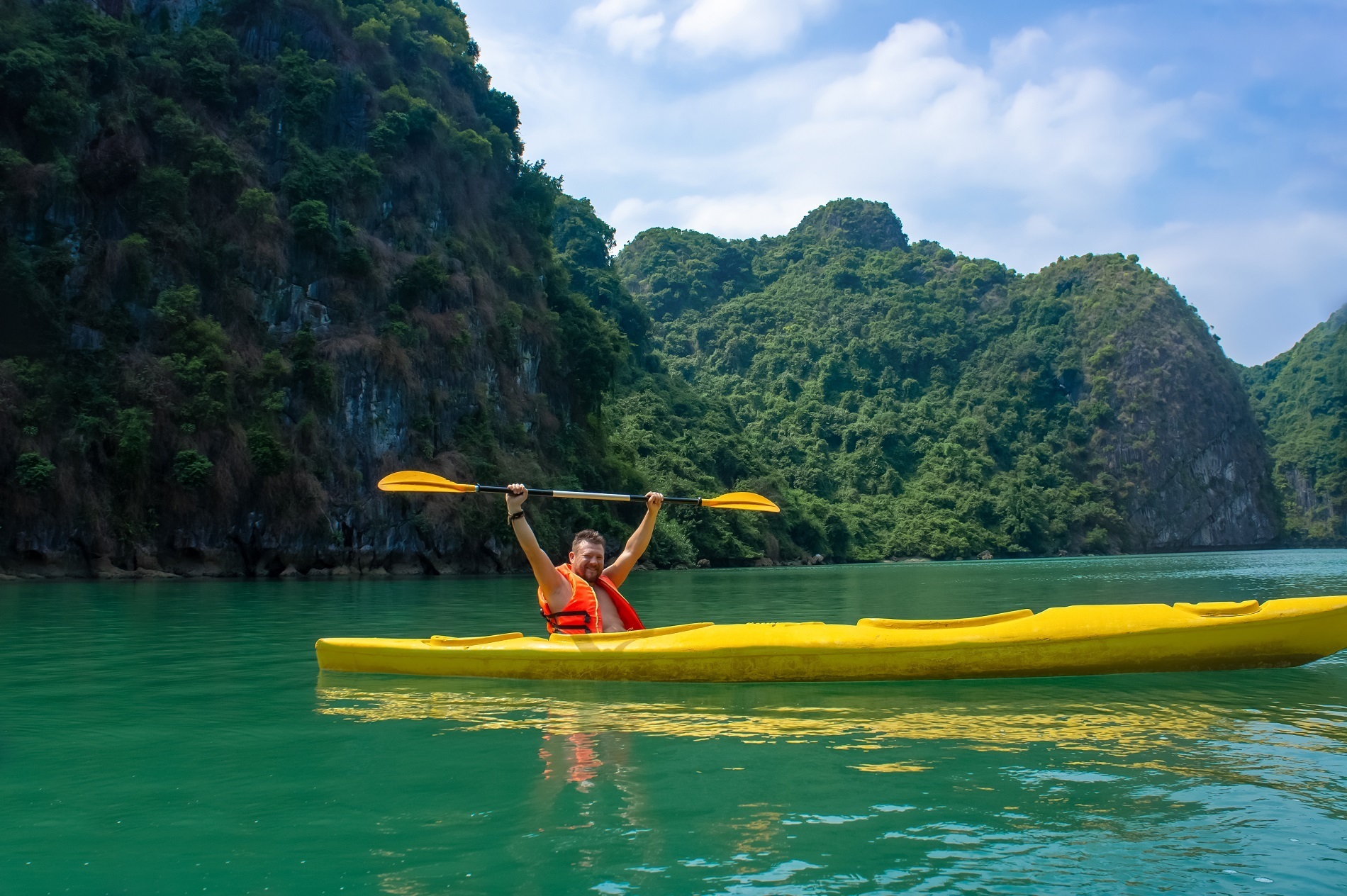 South of Ha Long, Lan Ha Bay in the northern city of Hai Phong spans 7,000 hectares and includes nearly 400 islands of all shapes. Unlike Ha Long, all islands in the bay are covered by trees and other vegetation. 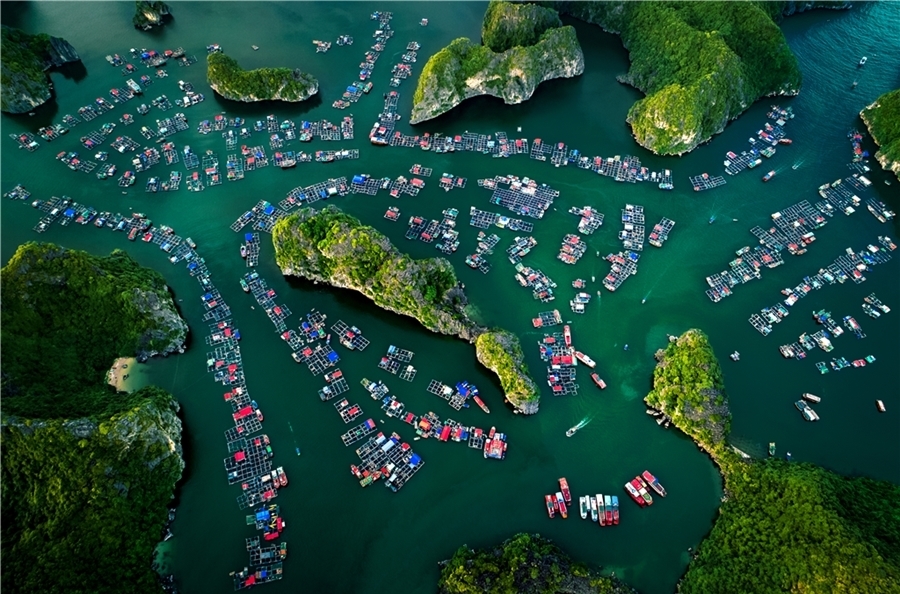 From Ben Beo Wharf on Cat Ba visitors can traverse the bay in varying vessels. 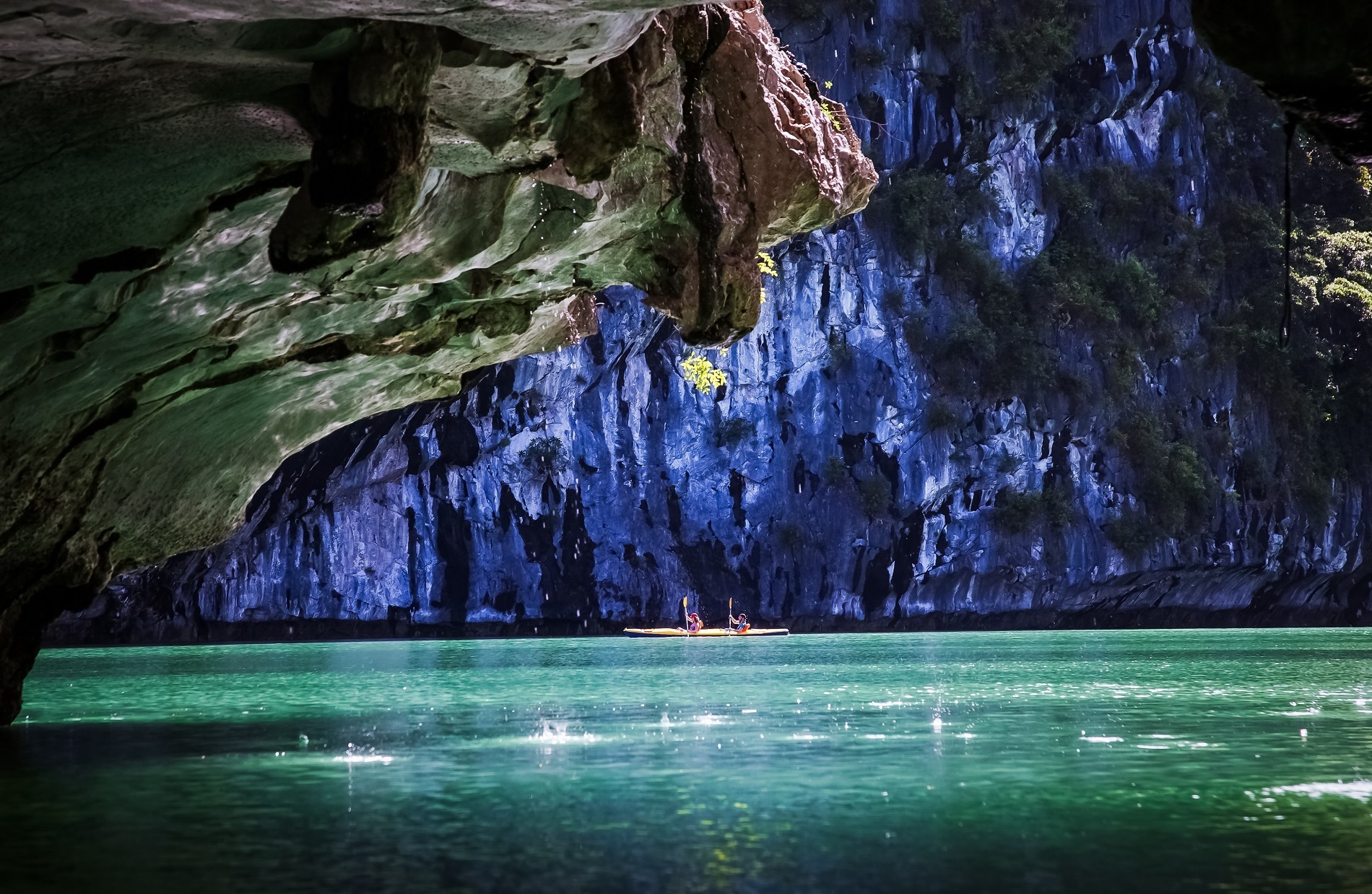 Consisting of 300 households, Cai Beo floating village, said to be the oldest in the country and a living museum of Vietnamese fishing culture, is described by U.S.-based travel site Travel+Leisure as “an overlooked treasure on the island”.

The eco-tourism area of Chay River and Toi Cave in the central province of Quang Binh commenced operation in 2011. 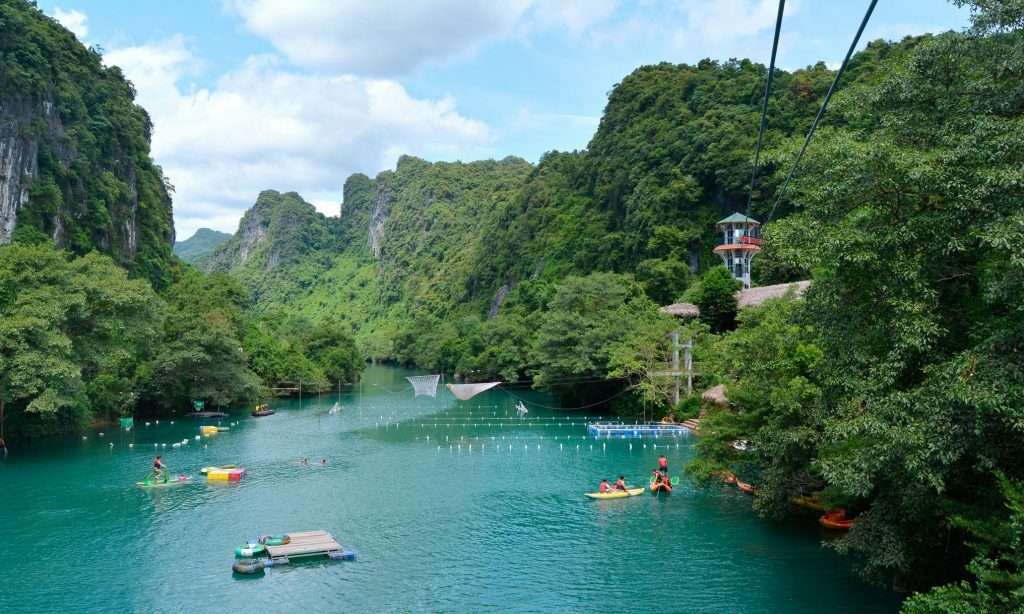 Kayaking is possible from the wharf at Tro Mong Forest Management Station in Bo Trach District of Quang Binh, home to the world’s largest cave Son Doong. Rowing along the 10 kilometer Chay River, which originates from the ancient karst mountain area of Phong Nha-Ke Bang, paddlers can take in ethnic riverside villages like Ha Loi, Phong Nha, Na, Tram, Me and Chay Lap.

Tuyen Lam Lake National Tourist Area, surrounded by pine forests, is around six kilometers to the south of Da Lat Town in the Central Highlands province of Lam Dong. October to December, when maple leaves turn yellow and red, is the best time to visit and take part in the sweet potato, strawberry and persimmon harvest. 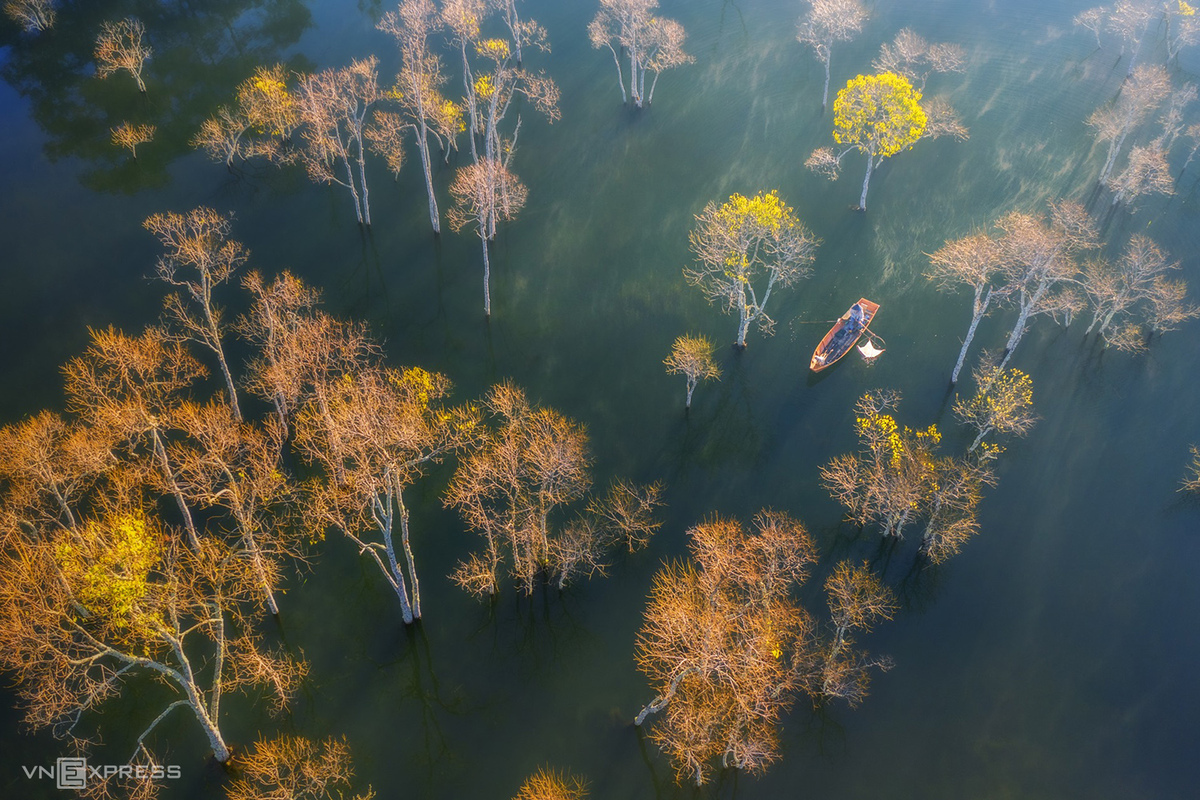 Tuyen Lam Lake is among the best spots to capture stunning misty mornings, as featured in National Geographic.