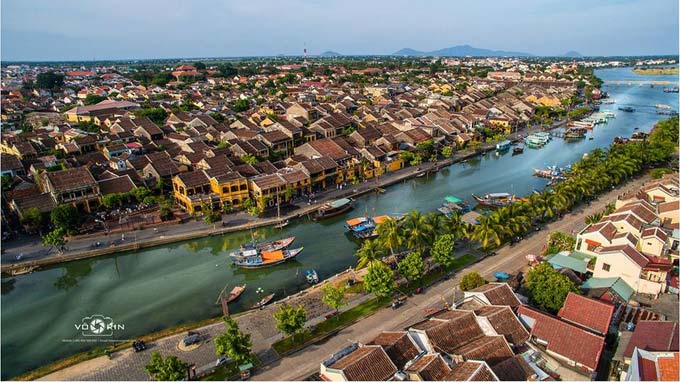 The ancient town of Hoi An is captured from above. Photo by VnExpress/Vo Rin

Hoi An has been ranked 14th among 20 best places in the world for expatriates to live by the The Travel website.

The website mentions the ancient town’s “cheap cost of living” as making it an ideal place for expats to stay in.

According to the Canada-based travel site, Hoi An in the central province of Quang Nam is the best candidate for budget-conscious foreigners who want to settle down in Vietnam.

An apartment close to the river in Hoi An will cost just $458 a month and while monthly food expenditure would be about $450. Hence, monthly living costs in Hoi An can be managed within $1,000, the site says.

Cuenca in Ecuador topped the list, followed by Ambergris Caye in Belize, the Philippines’s Tagaytay and Ljubljana in Slovenia.

Indonesia’s Bali made it into the top 10 while Cambodia came in the 11th on the list and Penang of Malaysia secured the 16th position.

The rankings are based on data garnered from Live and Invest Overseas, which calls itself the world’s “most trusted, most experienced, and savviest source for information on international living, retiring abroad, and investing,” and Numbeo, the world’s largest database of user contributed data about cities and countries worldwide.

Hoi An’s growing popularity as a top travel destination has been confirmed by earlier global rankings by prestigious travel magazines and newspapers.

U.S. news network CNN recently listed Hoi An as one of the 16 best places in the world to relax and de-stress.

Hoi An ranked second in a list of the 10 safest and most exciting places on this earth for solo travelers compiled by travel editors at Momondo, a U.K.-based travel site.

In 2016, the ancient town was hailed as the cheapest travel destination by budget tourism site Price of Travel, with daily expenses for a backpacker estimated at $22.29.